The Story of the Famous Asian Physicist: Leo Isaki

In 1973, Japan placed its citizens in the ranks of the Nobel Prize in Physics for the third time, namely Leo Esaki. Like his two predecessors, Hideki Yukawa and Sin-Itiro Tomonaga, the man who was born in Osaka, Japan in 1925 completed his bachelor to doctoral degree in his own country. This seems to prove that the level of quality of education in Japan is already very high as well as its human resources. Leo Esaki was born in Osaka in 1925 as Esaki Reiona. 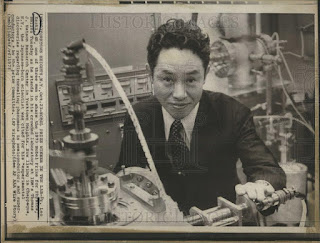 He completed his bachelor's degree in 1947 which was continued by working as a researcher at Kobe Kogyo Corp for 9 years. Then he became the leader of a research team at Sony Corporation, Tokyo while continuing his studies at the University of Tokyo where he earned his PhD in 1959.

While researching at the Sony company, Esaki engaged in a study of the tunneling effect on pn junctionsa semiconductor material. The tunnel effect is a quantum mechanical effect in which an electron can pass through a potential barrier which according to classical physics theory is impossible to break through. Esaki's discovery was followed by the creation of the Esaki diode (tunnel diode), a very important component in solid matter physics. This component is very small in size, uses very low power but works very fast, therefore this component is widely used in high-speed circuits in computers or communication networks.

In 1960 IBM's Thomas J Watson research center, Yorktown Heights, New York, United States looked at Esaki and invited him to join forces to develop semiconductor materials. Since then Esaki has been increasingly recognized internationally as an expert and pioneer who designed and developed the quantum structure of semiconductors, a new branch in the field of semiconductor physics.

Thanks to his persistence in conducting research on the tunnel effect in semiconductors to obtain very brilliant results, Esaki was awarded the Nobel Prize in physics together with Ivar Giaever and Brian Josephson. Before winning this prestigious award, Esaki already had many other awards, such as The Nishina Memorial Award (1959), The Asahi Press Award (1960), The Toyo Rayon Foundation Award for the development of science and technology (1960). Also The Morris N Liebmann Memorial Prize from IRE (1961), The Stuart Ballantine Medal from the Franklin Institute (1961),The Japan Academy Award (1965), The Order of Culture from the Government of Japan (1974).

In 1985 he also received an award from the American Physical Society for his expertise in opening a new field of physics called semiconductor quantum structures. Subsequently in 1991, the IEEE Medal of Honor was awarded to him in recognition of his leadership in the development of tunnel effects, superlatic semiconductors, and quantum wells.

Apart from various awards, Esaki also received honorary degrees from various domestic and foreign institutions. Among them from the Doshisha School and Kwansei Gakuin , Japan, then from the University of the Universidad Politecnica de Madrid Spain, the University of Montpellier France and from The University of Athens Greece. His reputation was recognized by the international scientific community when he joined the membership of the American Academy of Arts and Sciences in May 1974, the Japan Academy in November 1975,National Academy of Engineering (USA) in April 1977, the Max-Planck-Gesellschaft , March 1989, and the American Philosophical Society April 1991.

Apart from his prowess in the fields of science and technology, Esaki also tried to become a bridge between the Japanese and Western governments. Through the various essays he wrote, Esaki tried to bridge the gap between these two different cultures. In order to make his efforts more effective, he visits Japan several times each year and serves as Director of the IBM-Japan research laboratory, Director of the Yamada science foundation and the Japan science and technology development foundation as well as a professor at Waseda University.

In 1993, Esaki retired from IBM and became rector of the University of Tsukuba, which is known as a university with advanced technology. In 2001 because of his concern for education in Japan, he agreed to become chairman of the national commission for Japanese education reform welcoming the 21st century. The commission's emphasis is on shaping future education in Japan so that Japan can remain at the forefront of both technology and economics in the 21st century.