the Dark Side of Einstein's Life

Albert Einstein is known by his big name as a physicist. As a famous scientist, who would have thoughtEinstein had a dark side.

Yes, Einstein was not a perfect human. Einstein's life history that keeps this dark side can be seen from several letters to his wife and children. 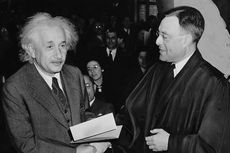 The Bitters of First Marriage

Einstein wrote a very cold letter to his first wife, Mileva Maric in July 1914. In the letter, Einstein conveyed a series of conditions under which he would agree to continue the marriage with Mileva.

"A. You have to make sure (1) that my clothes and linens are kept in order, (2) prepare me three meals a day in my room," Einstein wrote in his letter quoted in the November 1996 issue of the New York Times .

"B. You will leave all personal relations with me, except when it is necessary to maintain a social appearance," he added.

Apart from these two conditions, Einstein also wrote that Mileva did not expect affection from him.

"You shouldn't expect my affection ... you have to leave my room or study at once if I ask for it," Einstein said.

So far, experts have argued that Einstein's married life with Mileva was very important in the development of the physicist's scientific theory.

However, this letter gives a bitter picture of their marriage. In fact, experts consider this letter to show the dark side and sad end of their second marriage.

In fact, in 1990, the second story was recorded in "Albert Einstein-Mileva Maric: The Love Letters".

The book tells of the beginning of their meeting at the Zurich Polytechnic Institute in 1896. At that time, Mileva was the only woman who studied physics there.

The two later fell in love and dated. In his letters to Mileva at that time, Einstein wrote small poems and sent him a sketch of his feet so that Mileva could make knitted socks for him.

During those early years, Einstein envisioned Mileva as both a lover and an intellectual companion. Mileva also helped Einstein search for scientific data, check theoretical calculations, and copy notes.

These first letters by Einstein and Mileva were the first attempts to construct the theories that gave him his name.

Around 1902, Mileva gave birth to a baby girl out of wedlock named Lieserl. Unfortunately, Lieserl's fate is unknown and it is believed that the girl was adopted.

Einstein and Mileva married in 1903. In the same year, Mileva gave birth to Hans Albert and Eduard.

During his child-rearing years, Einstein managed to formulate some of his most important theories.

1905, he published three fundamental papers on the photoelectric effect, Brownian motion, and the special theory of relativity .

The happy days for Einstein and Mileva's marriage began to end in disaster around 1912. In that year, Einstein started having an affair with his cousin, Elsa Einstein.

In his letter to Elsa, Einstein even begins to show his disrespect for Mileva.

"An inhospitable being, without a sense of humor," wrote Einstein to describe Mileva.

"I treat my wife as an employee I can't fire. I have my own bedroom and don't want to be alone with her," Einstein said in another letter.

Not close to children

Not only separated from Mileva, Einstein's relationship was not very good with his children.

In fact, Einstein often wrote letters to his two sons, Hans Albert and Eduard. It's just that the letter is limited to teaching them geometry.

Apart from letters to teach geometry, Einstein only talked about the theory of his works.

These letters show Hans Albert's alienation from his father. Not only that, Einstein only showed concern for Eduard's health condition which continued to decline until he entered a mental illness.

Although not very close to his children, Einstein showed his affection in another way. He frequently gave career advice to Hans Albert.

Not only that, he provided various financial needs for Eduard. Until 1947, he said his energy had continued to decline.

When Mileva died in 1948, Einstein was worried about Eduard's plight.

"The worst thing is that Eduard was there alone without a caring hand, in his bad condition," Einstein wrote in his letter to Hans Albert.

"If only I had known, he would never have been born into this world," he added regretfully.

Eduard himself died in 1965 in a mental institution in Switzerland. Even so, Einstein had not seen his son for 30 years.