Exactly 75 years ago, the married couple Frank and Isobel Hawking had their first son. Born January 8, 1942, exactly 300 years after Galileo's death, this son named Stephen Hawking would become the most influential physicist of the 20th century. 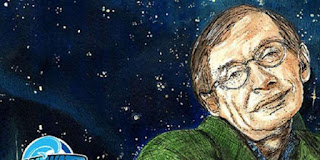 It is not only the concepts of black holes, gravitational waves and the big bang that make Hawking influential, but also his life as a sufferer of Amythropic Lateral Schlerosis (ALS), an adherent of atheism, and his passion for scientific communication. Hawking and his life provide us with valuable lessons. Anything?

Do not give up

As an ALS sufferer, Hawking is phenomenal. When diagnosed with ALS at the age of 21, Hawking was sentenced to only last 2 years. However, it turns out that Hawking is not only able to live up to now but also produce works that have a big impact.

In his short autobiographical book "Stephen Hawking: My Brief History", he reveals that he could not immediately accept his illness. At first, he felt bored with his life, feeling there was nothing useful he could do.

An experience at the hospital changed it. "I saw a boy in the bed next door die of leukemia. It was not a good experience. Obviously there are people who are worse off than me. Whenever I feel worthless, I always remember the boy."

"As soon as I was discharged from the hospital, I felt as if I was about to be executed. I then realized that there are many valuable things that can be done if I am tough. I also dream of sacrificing my life for others. If only I died afterward, at least I would do something good, "he wrote.

Hawking then devoted his life to theoretical physics. He gave birth to new ideas, including about black holes. According to him, black holes don't absorb all the information. There is radiation that is missed, which is then called Hawking radiation.

His latest work The Grand Design reveals views on the origin of the universe. According to Hawking, the universe and life were created spontaneously, immediately because there was an opportunity for that. The universe doesn't need a creator.

The epilogue of the book entitled "No Boundaries" reveals Hawking's reflections on his life. He did not feel that his illness had taken his life. "In some ways, it is an asset. I don't have to teach undergraduate students, I don't have to sit long on the committee. I can devote my life completely to research," he said.

"I have a fulfilling life. I believe people with disabilities should concentrate on doing what can still be done in a wheelchair and not regret other things that cannot be done," he said. In religious language, Hawking's life teaches to be grateful and never give up.

Hawking is indeed an atheist. Apart from saying that the universe does not need a creator, Hawking also said, "I think that life after death is conventionally a fairy tale for people who are afraid of the dark."

However, Hawking remains open to collaborating with religious circles. Last November, Hawking went to a science conference at the Vatican, to meet Pope Francis. Together with the church, Hawking warned about the threat of climate change.

Previously, he also met Pope John Paul II. He continued to appreciate even though the Pope said, "It is fine to study the universe and where it came from. But we should not ask about the beginning itself because it is the moment of God's creation and work."

In science, Hawking is also open to new ideas. Prior to the discovery of the Higgs Boson in 2012, Hawking believed that the particles, often called "god particles", would never be found. However, when scientists from the European Nuclear Research Organization (CERN) discovered it, Hawking appreciated it.

Working in a dreamy field like cosmology doesn't mean Hawking is in an ivory tower. He is also concerned with humanitarian issues and shares his ideas. On December 1, 2016, Hawking wrote in The Guardian, "This is the Most Dangerous Time for Our Planet".

In that article, Hawking stated that the world should be united to face challenges, not conflict and add new challenges. He criticized the policies of Brexit, Donald Trump, the development of artificial intelligence, and the internet.

According to him, internet and artificial intelligence allow groups of people to reap profits by employing few people. It is progress but also destructive. This will have an impact on job availability, inequality and massive migration to cities.

"More than any other time in history, our species need to work together. We face environmental challenges: climate change, food production, overpopulation, species extinctions, endemic diseases and increasing ocean acidity," he said.

In "My Brief History", Hawking said, he wanted to invite people to understand the development of understanding about the universe. He also said he didn't want to just write a good book. "If I spend the time and effort writing a book, I want to reach as many people as possible," he said.

The process of writing a book is not easy. Hawking had to revise many times according to the suggestions of his editor, Peter Guzzardi. Hawking said he was satisfied with the edits of the book. He is satisfied to be able to communicate the cosmos with minimal formulas because basically he also doesn't like formulas.

Meanwhile, one of Hawking's skills in motivating the younger generation was shown when he was present in the form of a hologram at the Sydney Opera House. He answered a teenage girl's question that may sound ridiculous, "What cosmological impact on Zayn Malik's departure from One Direction was followed by the disappointment of girls around the world?"

Hawking didn't say the question was stupid but instead invited the girl to get into physics to find out the answer. "Finally a question about something important. My advice to heartbroken girls is to pay attention to the study of theoretical physics. Because, one day there may be evidence of a plural universe," he said.

It is not impossible that outside our universe there are other universes that also exist, and in that universe, Zayn Malik is still a member of One Direction, "he added.