On March 14, 2017, the world was shocked by the death of physicist Stephen Hawking, it turned out that on the same day in 1879 another physicist was born.

He is Albert Einstein , the founder of the theory of relativity .

The son of a Jewish electric engineer was born in Ulm, Germany. After spending children in Germany and Italy, Einstein then studied physics and mathematics at the Federal Polytechnic Academy, Zurich, Switzerland. 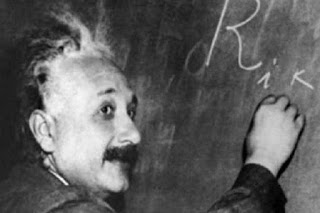 At that time, Einstein chose to become a Swiss citizen and in 1905 he earned a doctorate from the University of Zurich while working in the Swiss patent office in Bern.

In the same year, Einstein published five theories that would have a major impact on the development of modern physics.

This year is what many physicists call the annus mirabilis or the year full of miracles in Einstein's career.

One of the theories presented by Einstein was entitled "The Heuristic View of the Production and Transformation of Light".

There, Eisntein theorized that light was made of individual photons that acted like particles while collectively behaving like waves.

This hypothesis, which constitutes an important step in the development of quantum theory, arises from the results of research on the photoelectric effect.

His theory would later earn Einstein the 1921 Nobel Prize in physics.

In the second theory, Einstein presented a new method of counting and determining the size of atoms and molecules in a space.

Meanwhile, in the third theory, Einstein offered a mathematical explanation regarding the constant erratic motion of the particles suspended in the liquid, also known as the Brownian motion.

This last theory provided irrefutable evidence of the existence of atoms, which at that time was still a matter of debate among scientists.

The fourth best-known scientific work is what he calls the special theory of relativity.

In special relativity, space and time are not absolute, but rather a relative motion from the point of view of the observer.

This theory replaced Newton's opinion on space and time and included electromagnetism as written by Maxwell's equations.

This theory is called "special" because it applies to the principle of relativity in the "specific" or "special" case of inertial reference frames in flat spacetime, where the effects of gravity are negligible.

According to Einstein's theory, the speed of light is the same for all observers, independent of the speed of motion of the observer relative to the light source.

In his fifth theory, Einstein explored the mathematical formulas for the special theory of relativity. He said that mass and energy are the same and can be calculated by the formula E = MC2.

Although Einstein's revolutionary theories were not immediately accepted by the public, these works allowed him to enter the circle of the most famous European physicists.

He also later earned professorship at a number of universities in Zurich (Switzerland), Prague (Czech), and Berlin (Germany).

In 1916, Einstein published "The Basics of the General Theory of Relativity ," which argued that gravity, like motion, can influence intervals of space and time.

An object with a large gravitational mass, such as the sun, will appear to warp space and time around it.

This can be demonstrated by observing the starlight that crosses the sun before it reaches Earth.

In 1919, scientists studying solar eclipses verified the predictions made by Einstein in his general theory of relativity, and this statement instantly made Einstein a "celebrity."

Then several other things related to general relativity such as the shift in the orbit of the planet Mercury and the possibility of the existence of black holes were also confirmed by scientists.

Over the next decade, Einstein continued to make contributions to quantum theory and began work on combining various theories that he hoped would include quantum mechanics and the theory of relativity as explanations of how the universe works.

As was the case with public figures, Einstein too began to become political. He supported Zionism and opposed militarism and the plans to rearm Germany.

This statement made Einstein unpopular in his native country and after Adolf Hitler came to power in 1933, Einstein's status as a German citizen was revoked and he left the country.

He later settled in the United States and worked at the Institute for Advance Study in Princeton, New Jersey.

Einstein remained in New Jersey for the rest of his life working and while he was relaxing he chose to sail or play the violin.

In 1939, despite his belief as a pacifist, Einsten agreed to write to US President Franklin D Roosevelt on behalf of scientists who were concerned about the US reluctance to develop atomic weapons research.

Like other scientists, Eisntein is also worried that Germany will be the only country that has this lethal weapon.

However, Einstein was not involved in the Manhattan Project, which developed the atomic bomb which was later dropped on Japan.

In 1955, Albert Einstein, one of the most intelligent humans in world history, died at Princeton.